Let’s talk Conventions. They create a unique experience that caters to fans eager to immerse themselves in the pop culture landscape. While Chicago is home to C2E2 and a stop in the traveling Wizard World conventions, Heroes & Villains Fan Fest brought a new form of fan convention to Chicago. While I was skeptical about its lack of information on their website, I decided to tag along with my dad and younger brother anyway. I sure am glad that I did.

Heroes & Villains Fan Fest (HVFF) was able to set itself apart from Wizard World and C2E2. It provided a greater opportunity to meet and talk to televisions most popular series characters. For its first time in Chicago, it brought along actors from the shows Arrow, Gotham, The Flash, and a few others. Basically DC television.

I got to meet Robin Lord Taylor who plays the infamous Penguin on Fox’s Gotham. Taylor is the complete opposite of his villain counterpart from the show and is easily one of the nicest celebrities I have met. He took a few minutes of his time to chat with me which I came to find was refreshing considering some cons the celebrity guests sign your fan fare and you get quickly waved out of line by event staff. And honestly, if you have not seen Gotham, watch it. I am beside myself that Robin Lord Taylor has not won an Emmy for his stellar performance. I also met Erin Richards who plays the psychotic ex-girlfriend of  Jim Gordon, Barbara Kean. Though ill, she still took the time to hug and take pictures with each little kid that came up to see her which I was impressed by. 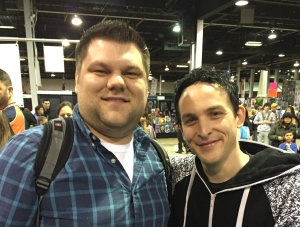 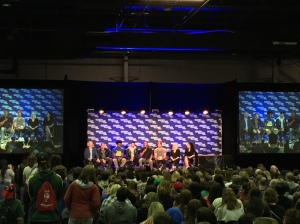 Furthermore, after an hour and a half wait, I got to meet Stephen Amell from the CW’s Arrow. My brother had tried at Wizard World to meet him but to no avail. So when he chatted with my brother for several minutes about basketball and autographed a picture for him I was happy to say the wait was worth it. I shook Amell’s hand after and thanked him for doing being there.

Something vastly different from the other cons was the huge celebrity Q&A Panels. This was something that you don’t typically get to experience much outside of San Diego Comic Con (or so I have heard.) That was an exciting experience in itself. 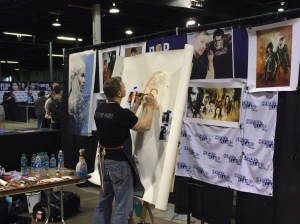 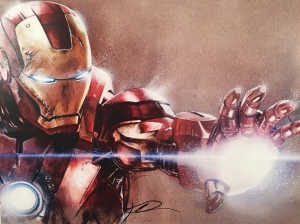 The other parts of the convention housed a limited number of vendors and artists. Again this convention is in its freshman year, so I can’t judge that too harshly. Once again, I saw Rob Prior who by some miracle is able to draw and paint with both hands at the same time. I have a several prints of his work and added another one to my collection. There was also a girl doing a large chalk drawing of the Flash, as impressive in scale as it was mesmerizing. 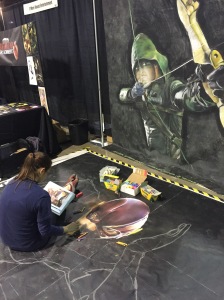 While thankfully not as crowded as the aforementioned other conventions, it still had enough going on to warrant and single days worth of admission. There were more experiences geared towards kids and family fun than other cons as well. I am anxious to see the HVFF brand grow and would be up for attending next years. As for this coming weekend, I am off to C2E2.