I have a considerable fondness for sketchbooks. It took me several years to figure out how much I could learn from them and how great their value is with the artistic insight the pages hold. I discovered they aren’t just a place to mess around with a pencil but a gateway into the inner workings of their artist. You get the visual representation of what an artist is thinking; how an idea is conceived and developed. Without that crucial time spent with a sketchbook, a marvelous work of art may have never come to fruition had it not been for behind-the-scenes work that led up to it.

Years ago, I had the fortunate experience of viewing the sketches that Mary Grand Pre began with for the U.S.  editions of Harry Potter first published by Scholastic. She had a gallery featuring her work from conception to published work in Cedar Rapids, Iowa. The walls were decorated with early drawings done in a sketchbook and refined on tracing paper. I saw covers for Harry Potter that could have been that never got past the sketching stage. How many people get to see that? How many people get to see in person the physical evidence of a celebrated artists process? Even in their sketch phase these images were breathtaking. Not in the way that you would see a Monet at the Art Institute in Chicago but in the way I felt I was experiencing magic in its roughest form. To see the hard messy work behind the iconic images that eventually came to be made me realize that beginnings are meant to be just that, beginnings.

The reason why I am sharing this is because many individuals like myself struggle with the notion that if we don’t get things perfect the first time, we have failed to amount to the expectation of others or worse, the unrealistic expectation of ourselves. It took me eons to realize that train of thought is absurd. \\\\Anyone who has tried and succeeded at becoming great at something has likely been through the ringer practicing, pushing themselves. For artists, sketchbooks are a means of practicing our craft and exploring ideas. You may sketch five pages of thumbnails before you find the right composition or draw a hand thirty-seven times before it is in proportion. The image of Harry and Dumbledore that we know today with them standing over a glowing stone basin was originally a rough sketch of them drifting the the black water in a tiny wooden boat. 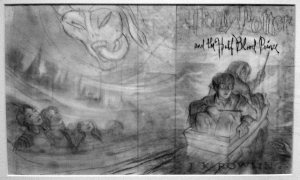 There is immeasurable value in what a sketchbook can do for an artist. So go do what I am about to do. Go grab a sketchbook and a couple of pens or pencils and explore without fear. What you hash out today, tomorrow or even after weeks of practice could become the foundation for your next great work of art.

P.S. Copy and search the following  “Imágenes de la Exhibición de Bosquejos de Mary GrandPré en Iowa!” into a Google Image search to see some of the sketches that I found someone had snuck of the Mary Grand Pre Exhibition. (No Pictures Were Allowed)